Barnitz plans to run, not walk to Wright State 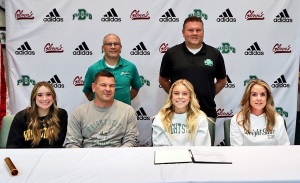 PROCTORVILLE – In the Christmas story ‘Santa Claus is coming to town’, Santa Claus tells Winter Warlock that walking is easy and all you need to do is put one foot in front of the other.

It may seem easy for them, but not for Fairland Lady Dragons senior cross country runner Reece Barnitz. 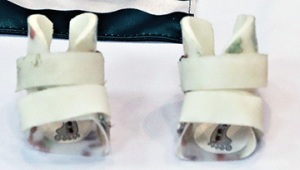 Barnitz was diagnosed with developmental delay at birth. The condition left her legs weak and wobbly and prone to breaking. The pediatrician told her parents that she might never run well or particularly fast. She wore braces for the first 5 years of her life and when she finally walked, Barnitz said she was “clumsy and fell a lot”.

Barnitz said she wrote an essay on the issue and said, “I might not have had the opportunity to race, so to be able to race at all let alone take it to the next level is really important to me.”

Even today, when she plays basketball for the Lady Dragons, she has her moments.

But not only was she able to run, but she is running at a level that got her to Wright State University.

Barnitz signed a letter of intent Friday to run cross country and track for the Raiders.

Barnitz said she had used many small schools, but Wright State was the only school that offered what she wanted academically.

“I was kind of drawn there because they have a medical school there and I’ve always wanted a school that has a kinda twinned medical school so I can get that experience early on and not having to worry about trying to go somewhere else,” said Barnitz, whose boyfriend Gavin Lochow will attend the nearby University of Dayton to play football quarterback.

“I like it and I like all the girls there too. (Her boyfriend being close) That’s a bonus I guess.

Although Barnitz overcame her early childhood disability, the road was not easy to get to where she is now.

Barnitz said she always played sports like softball, basketball, volleyball, among others. But in sixth grade, she decided to run cross-country, and the results didn’t make anyone believe she would pursue the sport.

“I wasn’t very good at all,” she laughed. “In seventh grade I ran track and started to like it a lot more. Still eighth grade track and I still don’t run cross country for other sports.

“And then in high school, ninth grade, we had COVID and no running tracks, so I was kind of away from that. And then when I got to Fairland in sophomore, I ran track and fell in love with it. That’s when I said ‘OK, that’s my thing.’ ”

Barnitz skipped volleyball from her junior year to run cross-country, and she fell in love with it.

“Over the last few years, I really got into it and decided that was what I wanted to do. If I’m going to play a varsity sport, it will be running,” Barnitz said.

By doing cross country, Barnitz said it has also benefited him in basketball.

“Everyone tells me I look the least tired on the court and I just run back and forth,” Barnitz said.

Going to Wright State means Barnitz will be in the middle of the pack among the runners and will have to move up the ranks.

“It’s still going to be all year. I will have cross-country skiing in the fall and directly in the winter which is an indoor track and in the spring it is an outdoor track. I’m ready to do it all year round,” she said.

Fairland cross country and track coach Chuck Wentz said Barnitz made an impression on the coaches when she decided to run track her sophomore year.

“She started racing track for us and that’s when we knew she was going to be good enough,” Wentz said.

“Then she started putting in the miles over the summer and really picked up the slack and became a really good cross-country runner.”

Barnitz was on course for a record-breaking season before injury sidelined the promising season.

“This year she was within 10 seconds of our mile record in August. We hadn’t done speed training yet, so she was well on her way to breaking our mile record and and maybe our 5K cross country record before she got hurt,” Wentz said.

“Very rarely do you have a girl who will text you on Sunday morning and ask if I can run 10 miles today? She’s a phenomenal athlete and a phenomenal student. She’s a student all the time. She’s always attentive and learns and she is willing to put in. When she works, she has excellent results.

Her 4.6 grade point average is a result of Barnitz’s study habits putting her first on her priority list.

“I really want to go to medical school,” she said.