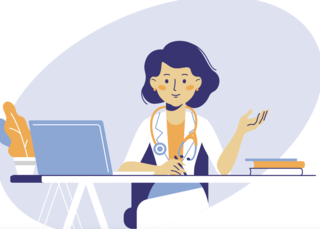 The first time this happened, I had intense pain in my chest. My attending physician, who was a woman, referred me to the cardiologist in her office, a man. He spent five minutes with me and diagnosed me with anxiety. I knew my chart was littered with mental health diagnoses such as depression, anorexia, and probably anxiety, as well as the mind-altering medications I had been prescribed.

I had had panic attacks and I knew those chest pains weren’t anxiety. I did something drastic for myself at the time and without telling my PCP, I sought a second opinion at a women’s health center in New York. The cardiologist was a champion of women’s heart health who was often quoted in the press. She asked the right questions regarding my history and symptoms and diagnosed me with Printzmetal’s angina, a rare condition in which a sudden spasm occurs in a coronary artery. The cardiologist prescribed me the correct medication and the frequency of the spasms decreased significantly. When I called my PCP to let her know about this new diagnosis, she simply said, “Thank you for letting me know.”

A recent New York Times article — “Feeling Rejected? How To Spot ‘Medical Gaslighting’ and What to Do About It” — states that “the experience of having concerns dismissed by a healthcare provider, often referred to as medical gaslighting, can happen to anyone.

This article indicates that medical gaslighting is more likely to affect women, people of color, geriatric patients, and LGBTQ people. In another Times article – “Women cry out for medical gas lighting”. “- the journal reported: “We know that women, and especially women of color, are often diagnosed and treated differently by doctors than men, even when they have the same health conditions.

Even though all of my psychiatric diagnoses are in complete and sustained remission, I still have to get my psychotropic medications on my medication list. Every time I go to a new doctor, I’m afraid that he (preferably it’s her) will take a look at the list and write me and my symptoms as being based on a mental illness.

This Times article also notes, “Women say doctors often attribute their health problems to their mental health, weight, or lack of self-care, which can delay effective treatment. Research suggests that women are twice as likely as men to be diagnosed with mental illness when their symptoms are consistent with heart disease.

At the beginning of 2017, I had stomach pains and nausea. The gastroenterologist (male) told me that I had chronic functional abdominal pain and that I had to learn to live with it. He hinted, not so subtly, that the pain was related to my mental health. I was so upset that I didn’t seek a second opinion for four months until I lost a lot of weight and was in excruciating pain. I went to see a female GI at the same women’s health center as the cardiologist mentioned above. She ordered many tests and in the end I was diagnosed with SIBO (small intestinal bacterial overgrowth) which occurs when there is an abnormal increase in the overall bacterial population in the small intestine. By the time I was diagnosed I had lost over 20 pounds and was tired and weak. The generally prescribed first-line antibiotic for SIBO, Xifaxan, was ineffective for me. I finally had to follow the Low-FODMAP diet and work with a nutritionist who specialized in this type of diet. It took me over a year to regain all the weight.

I again messaged through the patient portal to the original GI who misdiagnosed me, letting him know the correct diagnosis was SIBO. He also replied, “Thank you for letting me know.”

Is this their standard response? How about “I’m sorry I didn’t believe you”?