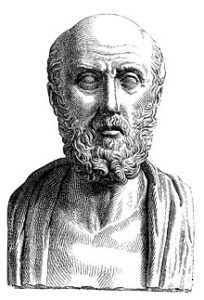 My friend Ted Levy, a retired doctor, told me on the phone this week that it’s not just the latest Woke Oath for doctors that’s the problem; nor is the traditional Hippocratic oath a prize.

So I encouraged him to write his point in two posts. The first takes both the Hippocratic Oath and the Revival Oath. It’s below. The second is his favorite replacement, which he invented. Here is Part I, his reviews.

Medical oaths have been in the news lately. Some conservatives have expressed dismay at a woke oath that has made the rounds, lamenting that society is moving away from the traditional Hippocratic oath. In fact, this move happened quite some time ago. And the Hippocratic Oath has its own problems. So I thought it might be fun to analyze both the traditional oath and the recent revival oath, and maybe compare them to what we’d like to see in a medical oath that libertarians might adopt.

Hippocrates of Kos was a Greek physician practicing around 400 BC. J.-C., traditionally called the “father of medicine”. The Hippocratic Oath bears his name. It is often thought to contain the famous phrase “First, do no harm”. It’s not. It is often thought of as an altruistic oath in which physicians pledge to do their best for the patient and for humanity. It’s not. Simple economic analysis indicates that much of it was designed to maintain a medical guild capable of raking in supra-market profits by limiting competition.

Consider some aspects of the Oath.

Very early on, after having sworn to Apollo, the god among others of medicine, the young doctor said that he “will retain my teacher in this art”. equal to my own parents; to make him partner in my livelihood; when he needs money to share mine with him.

That is to say that doctors in training guarantee financial security to university doctors and, if necessary, provide them with a sinecure. Good job if you can get it.

But a doctor in training must do even more for the masters who train him to enter the guild. The trainee must consider his master’s sons as his “own brothers, and teach them this art, if they want to learn it, free of charge or employment contract. Today, Ivy League schools are often condemned for offering “legacy admissions.” It is the practice of a college to give preferential admission treatment to the children of its alumni. As you can see, this is not a new idea. The medical guild of Hippocratic times wrote it in their oath. Legacies do not need to have demonstrated competence. They are automatically accepted and receive training to free. Good deal if you can get it. But the nature of guilds is, unfortunately, most people can’t get it.

The Hippocratic Oath continues with a pledge “to convey the precept, oral instruction, and all other instruction to my own sons, the sons of my teacher, and to indentured pupils who have taken the Healer’s Oath, but to no one else.” Hard to be clearer than that. The medical guild that backs the oath wants to limit practitioners not to those who best perform medical skills for the benefit of patients, but as much as possible to their own families, friends and loved ones. BUT TO NO ONE ELSE.

The oath then delves into two issues that, thousands of years later, remain hot topics. Former practitioners have pledged not to engage in euthanasia or abortion. You may well oppose both sides of that commitment today. Many do. But note that in both cases the oath is in opposition to patient autonomy, a value and principle that was not evident in antiquity but has become prominent in modern medical ethics.

Here is yet another example of how guilds work. The Hippocratic Oath has a passage that sounds strange to modern ears: “I will not use the knife, not even, verily, on the victims of the stone, but I will make way for those who are artisans therein.” In modern times, a surgeon is a type of doctor. In ancient times, a surgeon was a alternative to a doctor. Physicians treated their patients’ sick with potions, powders, ointments and advice. The surgeons (who were also barbers) opened the patient. The Hippocratic Oath (where “stone” refers to kidney stones or gallstones, horribly painful conditions for which surgery is usually warranted) tells doctors to do nothing in such cases, but rather refer them to a surgeon/barber. In other words, they must respect the rules of professional competence. Neither the Medical Guild nor the Surgical Guild competes with the other, to the benefit of both.

You might think, “That’s good. People with kidney stones should see a surgeon. But, as any modern surgeon can tell you, they are sometimes sent patients on whom they could operate, but would do just as well with non-surgical treatment. In ancient times, these patients did not receive the best treatment; they were handled based on how the guilds divided things up.

Medical guilds, protecting their members more than the public, have always been the rule rather than the exception. Historian Ronald Hamowy, in his article “The Early Development of Medical Licensing Laws in the United States 1875-1900”, published in the Journal of Libertarian Studies 3(1): 73-119 (1979), noted that since its inception in 1847, the American Medical Association has made every effort to restrict medical supply, largely through licensing. The AMA’s Code of Medical Ethics, based on and expanding upon the Hippocratic Oath, contained a variety of principles not based on patient care but on physician avarice. For example, an edition of the AMA’s Code of Medical Ethics pointed out the impropriety of “A Wealthy Physician [giving] free advice to the rich. Why? Because it diminishes the “common funds” of the guild, thereby “defrauding” fellow doctors.

But today, in the 21st century, only about 15% of American physicians are members of the AMA. The dramatic growth in third-party, largely governmental, payments to physicians in the second half of the 20th century achieved the AMA’s long-sought goals of limiting supply and increasing physician incomes and thus ironically declined its acceptance among physicians in private practice who are now satisfied. Instead, as government rules, regulations, and restrictions became a more important part of physician practice and needed to be emphasized in medical education, academic medical teachers and administrators became more prominent among members of the WADA. And university medical schools, lately, tend to be woke.

In December 2022, Robert Englander, MD, MPH, associate dean of undergraduate medical education at the University of Minnesota Medical School, led first-year medical students in their white coat ceremony. This is a traditional ceremony when changing from layman to medical professional, where students first wear the symbolic “white coats”, clothes they will continue to wear throughout their medical school, of their boarding school and residence. But Dr. Englander’s words, dutifully repeated by the first years, were anything but traditional. He had rewritten the medical oath to, in his view, fit the times.

He began by noting that the medical school was “located on Dakota land,” referring to land owned by the Dakota Indian tribe. He added:

“[T]its recognition is not enough. We are committed to uprooting the legacy and perpetuation of deep-rooted structural violence in the health system. We recognize the inequalities constructed by past and present trauma rooted in white supremacy, colonialism, gender binary, ableism and all forms of oppression.

So it seems clear that when Englander (how an appropriate name for someone acknowledging his role in white supremacy and colonialism!) said the medical school was “located on Dakota land”, he did not mean “purchased from the Dakota Indians”. He meant illegitimately taken of them. Yet for all his expressed desire to end the “perpetuation of structural violence” and acknowledge the inequalities rooted in white supremacy, colonialism, gender binary, ableism (in medical school??, a place devoted to training people to help the sick and crippled??), and “all forms of oppression”, Englander never mentioned his desire to return the land stolen. I can’t speak for Native Americans, of course, but I would bet that if they had the choice of reclaiming their land or dealing with the traumas associated with the gender binary, they would take the land.

However, Englander and his revival oath were far from over. He went on to pledge to “heal our planet”. As Alex Epstein noted in his book Fossil future, environmental pleas to heal the planet involve demands to minimize, if not eliminate, human impact on the environment. Hence the need to reduce energy consumption as much as possible. Does Englander have any idea how much energy modern hospitals use? Perhaps that’s why his pledge also pledges to “honor all Indigenous healing methods that have historically been marginalized by Western medicine.” Admittedly, acupuncture and herbal medicine consume much less energy than CT scanners and extracorporeal lithotripsy machines.

The revival oath also contains a vow “to assume our role as members of the community and to strive to embody cultural humility” but also “to learn from scientific innovations made before us and to commit to advancing and sharing this knowledge with peers and neighbours”. The Woke never see the contradictions in their visions. Many communities in America, we have learned in recent years, are concerned about vaccines. Should white coats who learn of Jenner’s past scientific innovation “share that knowledge” with neighbors in the community? Or should they “embody cultural humility” and not evoke it, instead recommending “indigenous ways of healing…historically marginalized” in the past?

Reading this version of a medical oath on YouTube caused much consternation. FIRE, the Foundation for Individual Rights and Expression, sent the medical school a letter of concern and received confirmation from the dean that no one was required to attend the white coat ceremony or to take an oath. But if you become ill in the Minnesota area in the future, remember that you have options for indigenous and historically marginalized medicine, as well as Western medicine. Well, maybe not all western medical options, but at least the culturally humble ones.

The image above is of Hippocrates.

Next step: the replacement of pro-medical freedom suggested by Ted Levy.